Tiny acts of rebellion by an everyday activist 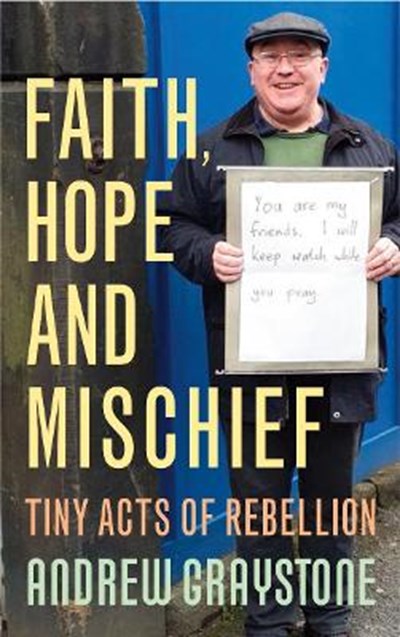 Tiny acts of rebellion by an everyday activist

Andrew Graystone is an everyday activist who believes in the power of tiny acts to change the world. He is the person whose image went viral when, after the mass shooting in the Christchurch mosque, he stood outside the mosque in his Manchester neighbourhood with a cardboard sign saying 'I'll watch while you pray'.

Faith, Hope and Mischief tells funny, prophetic and powerful stories of tiny acts of rebellion Andrew has carried out, alongside arresting reflections on what it means to live in faith and hope. His stories delight and challenge in equal measure, showing how the kingdom of God turns up in all kinds of ways and how small things make a big difference.

His stories encourage readers to take risks, make holy mischief, poke fun at the over-mighty, and believe that despite evidence to the contrary, the world's story is going to end well. This is a manual of everyday activism, a wellspring of wit and wisdom for days when hope is hard to come by, and an inspiration for anyone who feels powerless to make a difference.

'A great read — challenging, hilarious, poignant... you feel that all the lessons of a well-lived life are on a plate here. Like sitting down for a chat with an old friend, I loved reading this book.' - Jeremy Vine

'Andrew Graystone’s story of reaching out to his local mosque is funny, touching and lovely.' - Victoria Coren Mitchell

Andrew Graystone is a familiar voice on Radio 2, Radio 4 and Radio 5Live. A former BBC TV producer, he writes for the Guardian and Private Eye and teaches communications, ethics and digital culture in many UK theological colleges and universities. He speaks widely at churches, events, conferences and festivals.